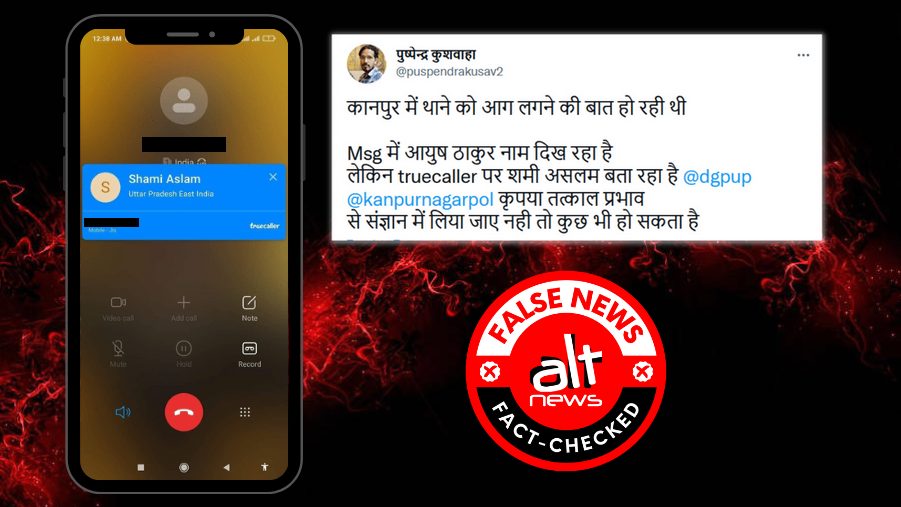 Amidst the ongoing nationwide protests against the implementation of the government’s Agneepath Scheme, a new military recruitment policy, a screenshot of an alleged chat on a WhatsApp group is widely circulating on social media. In the group called ‘Boycott TOD (Tour of Duty)’, some people can be seen conspiring to burn down the Ramadevi police post.

Sharing a screenshot of this alleged WhatsApp chat, Twitter user @puspendrakusav2 claimed that the youth, Ayush Thakur, who can be seen in the chat inciting people to burn the police post is actually ‘Shami Aslam’, a Muslim going by the alias Ayush. The name appears when one looks for it on Truecaller, a mobile app that helps with caller identification.

Many Twitter users have shared the same screenshot claiming the same.

The name Shami Aslam indeed appears on the TrueCaller app when the number of the person named ‘Ayush’ on the alleged chat is searched, however, when one looks for the number on Twitter, one can see a user with the name Ayush appears in the search result. In the tweets, he’s appealing to Sonu Sood to arrange medical help and oxygen for his uncle whose condition was deteriorating. He mentioned the same phone number, as is currently viral, at the end of his tweets.

Comparing the Twitter and WhatsApp profile pictures we noticed the following:

We contacted the Media Cell set up by the Kanpur Nagar Police and was informed that after the arrest of Ayush Thakur in the investigation of case number 650/2022, police station Chakeri, it was found that this number is in the name of Shakuntala Devi and is being used by Ayush.

The same details were also confirmed to us by a senior police official over a telephonic call.

Why does the name Shami Aslam appear on TrueCaller?

When we looked for the number on Google, it appears under the name Sana (name changed) on multiple blogs. Most likely the number previously belonged to a Muslim individual. A comment on a blog post made in 2010 also suggested the same. We are not linking these blogs to preserve the individual’s privacy.

Alt News reached out to TrueCaller to understand how contacts are saved on the app but we were sent a boilerplate response. A blog on TrueCaller’s website, however, provides some insight into how the app determines a person’s identity via a phone number. A blog post titled ‘How Truecaller’s Caller ID Works‘ says that TrueCaller uses crowdsourcing to determine a contact name, so if the number was saved under the name of “Shami Aslam” by most of its users then the app showed the same.

Alt News spoke with a person who had previously owned this number. On the condition of anonymity, the person said that they had stopped using the number a couple of years ago and didn’t know any Shami Aslam. The number was transferred to someone else as this person had not paid the bills for the connection.

To sum it up, the number was indeed being used by Ayush Thakur currently and a mismatch in the name on TrueCaller led to the misinformation.