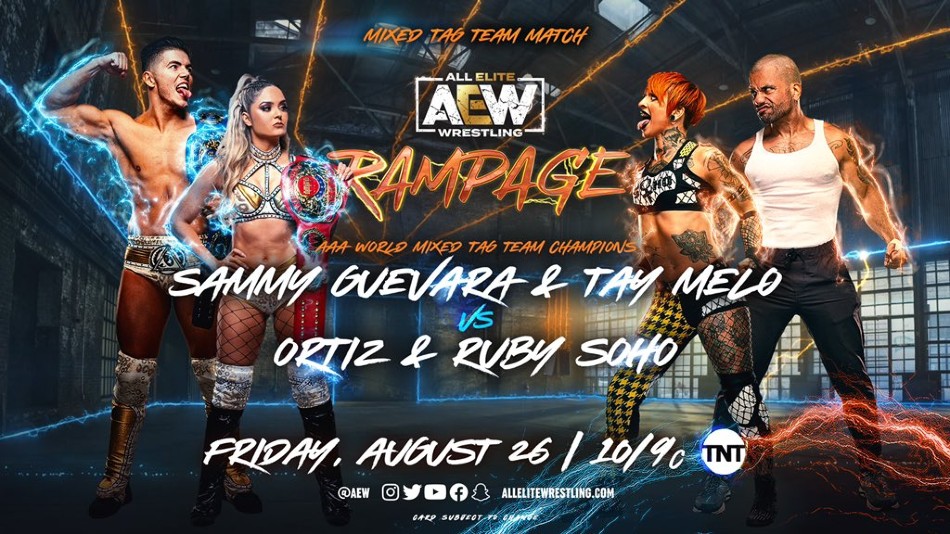 Additionally, it was announced that Wheeler Yuta will put his ROH Pure Championship on the line against Daniel Garcia next week on Dynamite when AEW’s flagship show visits the KeyBank Center in Buffalo, New York.

Garcia has been teasing a face turn ever since he faced and earned the respect of Bryan Danielson two weeks ago on Dynamite. Next week will mark his second title match opportunity against the champion, with their first encounter occurring at ROH Death Before Dishonor 2022 in July.

Next Wednesday on #AEWDynamite Wheeler Yuta will defend his ROH Pure Championship against Daniel Garcia. pic.twitter.com/kSliL3znOD

A few matches for the next episode of Rampage have also been announced during last night’s Dynamite. Preston Vance was ruled out of active in-ring competition due to injury while Evil Uno was taken out of the equation by Andrade on the show.

Then, Adam Page took care of the third spot in Dark Order’s match against Best Friends as this trios tag team match featuring six superstars will now go down for the Trios Tournament Semifinals this Friday on Rampage.

#DarkOrder‘s 10 is unable to compete in this FRIDAY’s #AEW World Trios Tournament #AEWRampage Final. Just made official: Hangman Page will be taking his place to stand alongside #DarkOrder against #BestFriends & Orange Cassidy!

Tune in NOW to #AEWDynamite LIVE on TBS pic.twitter.com/JJSoFCqbiq

AEW World Tag Team Champions Swerve In Our Glory will feature in a promo exchange segment with The Acclaimed on Rampage ahead of their tag title bout at 2022 All Out. Strickland and Keith Lee volunteered this title match opportunity to Max Caster and Anthony Bowens to set up the match.

Also, QT Marshall will compete against Ricky Starks in a singles bout as The Factory’s persuasion to convince Starks to join their faction continues. This group even delivered a beatdown to Starks in order to please their leader, Powerhouse Hobbs.

Real-life couple Sammy Guevera and Tay Conti will be in action in a mixed tag team match while WWE Hall of Famer Mark Henry will also be present for an interview session with the current AEW TBS Champion.

The September 2 episode of AEW Rampage has already been taped from the NOW Arena in Chicago, Illinois. The match card for the weekly AEW program stands as follows:

– Swerve In Our Glory & The Acclaimed promo

5 Tips to Clean Your House This Festive Season

67 Imagination Quotes To Bring Out The Best In You