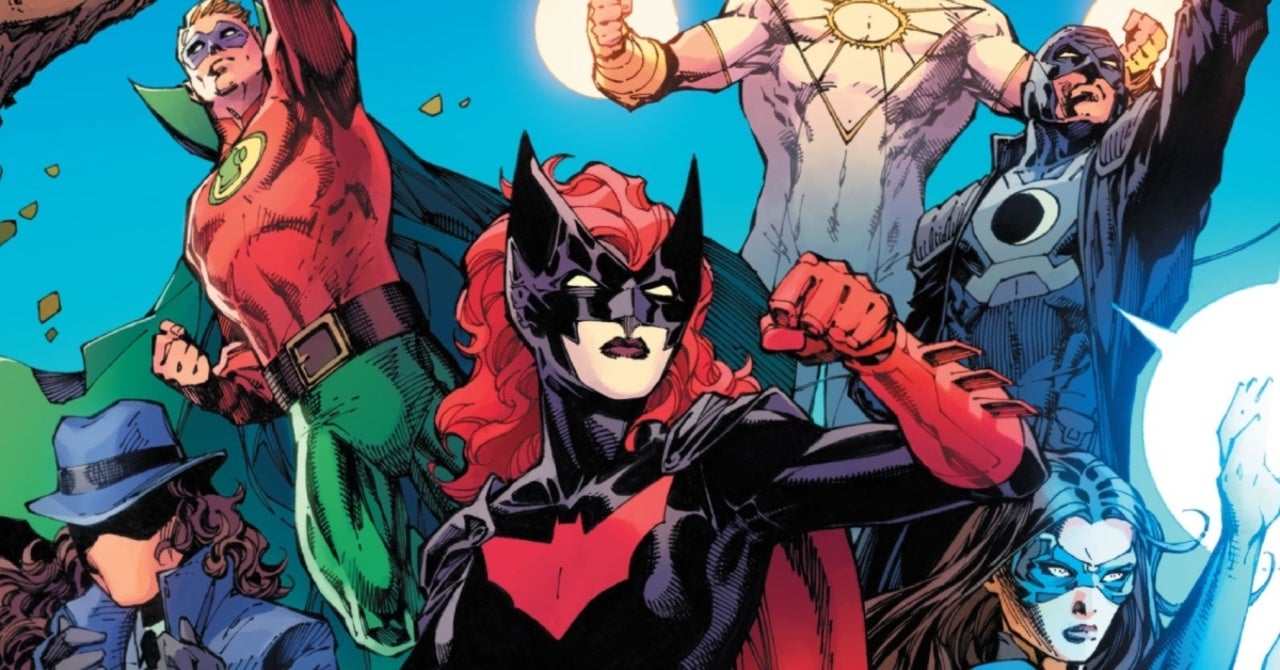 In the foreword for DC Pride, writer Marc Andreyko proclaims that “if you had told 13-year-old me that [the book] would ever exist, I would have never believed it.” As a queer woman—one who spent years searching through the comics and other media I consumed with a fine-tooth comb, hoping for subtext that would make up for scarce positive canonical representation—that sentiment became a blinking light in the back of my mind the entire time I read DC Pride. The oversized one-shot, which spotlights an array of LGBTQ+ characters in DC Comics canon, is a genuine marvel to experience, one that is chock-full of positive, entertaining, and compelling stories brought to life by (mostly) LGBTQ+ creative teams. In every sense of the word, DC Pride is a celebration—of the LGBTQ+ characters within the DC universe, and also of what kind of positive representation mainstream comics is truly capable of.

As the name would suggest, DC Pride is a collection of (largely-standalone) stories surrounding the publisher’s LGBTQ+ characters, ranging from household names to cult favorites to obscure heroes and villains. Almost all of the stories—even amid the occasional action-packed fights—have plots that boil down to everyday facets of the queer experience, whether it be preparing for a date (both “Clothes Makeup Gift,” which revolves around Future State’s nonbinary Flash Jess Chambers, and “Date Night,” which serves as the first comic introduction of Supergirl’s Dreamer), having a long-overdue conversation with a family member (the Alan Scott and Obsidian-centered “He’s the Light of My Life”), or attending one’s first Pride parade (“Love Life,” which revolves around Jackson Hyde’s Aqualad and a few guest stars). That framing ends up being one of the most refreshing aspects of this issue, especially as none of the stories ever veer close to viewing sexuality and identity as a source of trauma. Given how prominently toxic tropes like “Bury Your Gays” were in mainstream media just a few years ago, and the dicey ways LGBTQ+ characters were portrayed in media in the decades before that, there’s something infinitely refreshing about having so many stories where these characters not only survive, but begin to thrive. This is exemplified with the issue’s use of Extrano, DC’s first openly gay superhero, whose controversial history in comics is spun into something fascinating and almost celebratory by the final page.

At the same time, DC Pride does shine a nuanced light on the trials and tribulations that the LGBTQ+ community has faced over the years, and continues to face through this day. While nearly every story does so in some capacity, there are some emotional standouts. “The Wrong Side of the Looking Glass,” which provides an earnest retelling of Kate Kane/Batwoman’s lifelong quest for self-acceptance as a lesbian, begins the issue with a proverbial—but incredibly relatable—gut punch. Another emotional standout is the aforementioned “He’s the Light of My Life,” which recontextualizes Alan Scott’s recent coming out against decades of internalized homophobia and shame pushed on queer culture across much of the 20th century. Even some of the more lighthearted fare still finds a way to convey aspects of the queer struggle, whether it be the economic struggles of LGBTQ+ communities in “Be Gay, Do Crime,” the energetic team-up between Pied Piper and Drummer Boy, or repressed insecurities in the aforementioned “Love Life.” Scattered throughout the stories are other endearing nods to queer culture and history, whether through tackling the erasure of queer history head-on in the Midnighter and Extrano-led “By the Victors,” or having Harley Quinn and Poison Ivy earnestly embody the trope of “U-Haul lesbians” in “Another Word For a Truck to Move Your Furniture.” That isn’t to say that DC Pride will provide a wholly comprehensive look at the LGBTQ+ experience, but the array it showcases feels downright revolutionary in a Big Two comic book.

It helps that every story in DC Pride is genuinely good, and exemplifies what comic storytelling is structurally capable of. Each story finds a tone that perfectly suits its respective characters, whether a moody action-adventure (both “By the Victors” and the exhilarating Renee Montoya-led story “Try the Girl”), an upbeat romp (“Date Night,” “Clothes Makeup Gift,” and “Another Word For a Truck to Move Your Furniture,” just to name a few), or something in between. There’s an authentic burst of creativity in every page of the issue, with choices made in pacing, characterization, and layout that make even the smallest stakes feel engrossing. If anything, the artistry on display makes it a little disappointing that more of DC’s LGBTQ+ characters aren’t given their own stories—yes, cult-favorites like Traci 13, Jo Mullein, Scandal Savage, and Catman are featured in expertly-created pinups, but they (and a number of characters) merit a nuanced treatment within the current comics world as well.

In terms of art and lettering, there isn’t a weak link in DC Pride, but some stories’ aesthetics display awe-inspiring implementations. Trung Le Nguyen’s art and Aditya Bidikar’s lettering in “The Wrong Side of the Looking Glass” is a fascinating start to the issue, using blue and reds amid a cartoony landscape to great effect (while, honestly, raising the question of why there hasn’t been a Batwoman YA graphic novel yet). Klaus Janson’s art, Dave McCaig’s colors, and Tom Napolitano’s lettering on “He’s the Light of My Life” expertly transports readers between the Golden Age and the present day, with a gorgeous use of greens and oranges. Rachel Stott’s art, Enrica Eren Angiolini’s colors, and Steve Wands’ lettering on “Date Night” also turns Dreamer’s National City into a neo-noir playground, and shows how much potential the character and her powers have in comics going forward. It’s also worth shouting out each of the brilliantly crafted, Instagram-worthy pinups in the issue, particularly Kevin Wada’s take on John Constantine, and Kris Anka’s rendering of Scandal Savage, Knockout, and Jeanette.

DC Pride delivers on absolutely every level, simultaneously honoring the LGBTQ+ characters within its stories, the creators bringing them to life, and the fans who have been following the fictional universe. It might not capture every single aspect of the queer experience, but it normalizes a profound amount of it, all while executing stories that are a narrative and artistic joy to experience. Getting to see DC Comics’ LGBTQ+ characters and creators take up space and thrive in such a profound, entertaining way is a gift—one that is both perfect for Pride Month and anyone looking for an outstanding collection of comics. To put it simply, DC Pride is something I—and so many other LGBTQ+ readers—would have loved to read growing up, which makes its arrival in 2021 a source of celebration and pride.

Denial of responsibility! My droll is an automatic aggregator of the all world’s media. In each content, the hyperlink to the primary source is specified. All trademarks belong to their rightful owners, all materials to their authors. If you are the owner of the content and do not want us to publish your materials, please contact us by email – [email protected]. The content will be deleted within 24 hours.
Comic ReviewsDC ComicsDC Pride
0
Share