A League of Their Own 2022: Amazon Prime’s remake honors the original 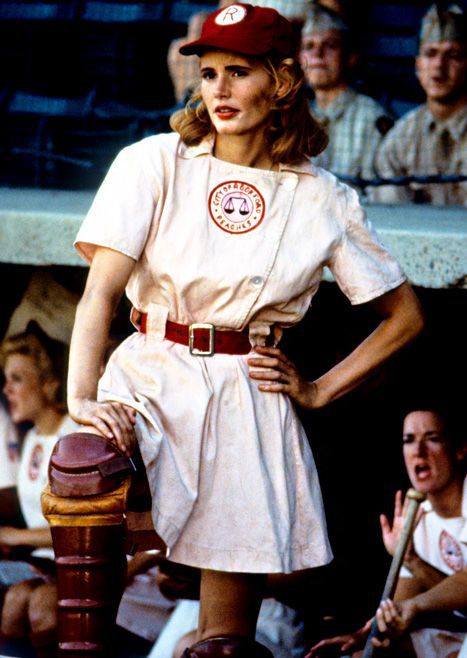 The new Amazon Prime series A League of Their Own comes 30 years after the classic original film hit a home run into the audience’s heart. The 1992 A League of Their Own, which tells the story of the short-lived All-American Girls Professional Baseball League, is one of those perfect movies you can watch at a sleepover when you’re 10 years old and on cable when you’re 30. Every time, it simply works. And, somewhat improbably, the new series lives up to its predecessor.

The new A League of Their Own, co-created by Abbi Jacobson and Will Graham, is a shining example of what an adaptation of a classic can be and rarely is. It is affectionate to its source material and true to its spirit, while at the same time aiming for an entirely new idea. The 2022 version is an adaptation that works by absence and by division. It removes one of the pillars of the original, and plays in the space left behind.

The TV show starts off by offering a few clear analogues to some of the major characters of the 1992 original. D’Arcy Carden and Melanie Field’s Greta and Jo fill the space of Madonna and Rosie O’Donnell’s Mae and Doris — the glamorous femme and the butch who are improbable best friends. Nick Offerman’s Dove fills in for Tom Hanks’s Jimmy, the dour coach more than a little skeptical about the idea of women playing baseball.

But the new show doesn’t quite have a character who fills the place of Geena Davis’s Dottie, the original movie’s protagonist. In the space where Dottie used to be, new and exciting storytelling possibilities flourish.

In the 1992 film, Dottie is the heroine. The film, which centers on the women who became pro ballplayers as men left to fight in World War II, is built around Dottie’s single season as the catcher for the Rockford Peaches.

There, Dottie is also so clearly the All-American League’s ideal lady baseball player that the team managers build their press narrative around her: Dottie, they declare, will be the Queen of Diamonds. While the persnickety charm school the baseball players are forced to attend has criticism for the looks of nearly every other player, they greet Dottie with “Lovely.” When the press appears bored by the team’s practice, Dottie’s able to stage a quick photo op by doing a split while she catches a baseball in front of photographers.

An enormous part of Dottie’s appeal for the League is how natural she seems. Madonna’s Mae is all red lipstick and curlers, on the verge of being too feminine, but Dottie is positioned as the chaste and natural beauty next to Mae’s tryhard sluttiness.

The same emphasis on naturalness goes along with Dottie’s talent as a baseball player. Her kid sister Kit works like a demon to become a great player, but for most of the film, Dottie outshines her without apparently trying. Dottie is so good so easily, the implication is, that she can afford to throw her talent away if she wants to. She is not the sort of woman who will make a fuss when the men come home from the war and want their wives to go back to the kitchen. She is unambitious and so unthreatening.

The tension of the film comes from the ambiguity about how much Dottie actually does care about being good at baseball, and the question of whether she might in fact be trying — to be a great player, to grab attention from the press — while also working hard to appear that she’s not. That’s why the climax, in which Dottie loses a play to Kit and it’s not clear whether she does so intentionally or unintentionally, lands so well. Either interpretation of Dottie’s actions works with what we know of her character.

The new League of Their Own, though, looks at what happens to the All-American Girls Professional Baseball League with no Dottie at all, ambivalent or not. What do you do when there is no perfect player?

The clearest thing to a Dottie analogue in the reboot is Abbi Jacobson’s Carson. (Jacobson also co-created the new show.) Carson takes Dottie’s place as the point-of-view character, catcher, and eventual coach for the Peaches, with a husband away in the war.

Still, Carson is no one’s idea of a perfect representative for the All-American League. She is made up to look respectable, but not to look like a great natural beauty. She’s a talented player, but not the best on the team. She can’t hide the fact that she’s not completely happy in her marriage, that she doesn’t particularly want kids. She is not the kind of person the League wants to sell its fans.

In fact, none of the characters of the new League of Their Own slot easily into the ideal they’re supposed to fit, the Dottie, the Queen of Diamonds. As a result, it becomes ever more clear how unrealistic and unfair that ideal is.

The many butch players of the Rockford Peaches are punished one after another for not being feminine enough. One is kicked off the team for failing at charm school, while another is fined for wearing pants outside the house.

Heightening the problem of the players’ failure to live up to the League’s feminine ideal is the fact that here, many of them are explicitly gay. (Any queerness in the original film remained strictly subtextual.) “Why do you think they’re doing all this, Carson?” Greta asks as they make the rounds through charm school. “It’s to make sure we don’t look like a bunch of queers. That’s what all of this is.”

Glamorous Greta, who uses her femininity as a defensive weapon to hide her own queerness, makes a point of acing the charm school curriculum. It does her no good. Misogynistic fans mock her for blowing kisses to the crowd and then crow that she’s asking for their mockery. The League’s management tells her that she is, like her 1992 analogue Mae, “a little too much.”

All of the players in the 2022 show are explicitly ambitious, and all of them are belittled by both their coach and their fans for trying to take their work seriously. And Coach Dove, unlike Tom Hanks’s slowly redeemed Jimmy, does not stick around to have his mind changed by the sheer hard work of his players. As soon as he gets a better job offer, he abandons the Peaches to their fate.

There’s one other character on the new A League of Their Own who we might consider Dottie’s analogue. That’s Max, a Black woman who’s a brilliant pitcher, played by Chanté Adams. It’s Max who replicates the famous shot from the original film of Dottie plucking a viciously hurled ball out of thin air; Max whom other characters remark on as both the best natural talent they’ve ever seen and as a great beauty. For most of the season, though, Max can’t find anyone willing to let her play. Yet it’s Max who succeeds best at building a space for herself separate from the demands of the All-American League and its ideal woman.

Max is torn between the future imagined for her by her mother Toni, who owns a beauty salon and wants Max to take it over, and the alternative path symbolized by Bertie, Toni’s long-lost sister who turns out to be a trans man. In the end, Max is able to find her own way. She cuts off the hair Toni doted on; when Bertie gives her a suit, she wears the trousers and vest but not the jacket. So rejected is she from every seat of power that she is forced to build her own ideal. When at last she makes her way onto a real professional baseball team, it’s through the solidarity of another queer Black woman.

Meanwhile, Carson’s eventual transformation into a hero comes not through her athletic talent or beauty or modesty, but through her ability to build a community with her fellow teammates. With Coach Dove away, Carson takes over as coach, and is able to mold her fractious teammates into a loving and supportive group for one another. Under Carson, the Peaches start winning games, but their true redemption comes from learning how to take care of one another.

The 1992 League of Their Own is a great movie in part because of the attention with which it explores Dottie’s own ambivalence over the ideal she finds herself embodying, and her bond with the players who the press palpably considers to be lesser than she is. Most poignant is her relationship with Kit, who the world treats as less pretty and less gifted and less womanly than Dottie — but who wants, ferociously and without apology, to be a great player. In the end, she proves herself to be a better player than Dottie, and it’s impossible to tell whether Dottie gave her that moment as a gift or whether Kit wrestled it away for herself.

The new A League of Their Own does not offer a similar moment of ambiguity. It knows that to do so would be to face diminishing returns when compared with the original. What makes this new show a great adaptation is that instead, it removes the heart of the original film, and it builds a new one.

Because without a single Dottie ambivalently embodying the ideal demanded of the players — without a queen on the diamond — every character we see has to find her own way to tear down the picture of the woman who she is supposed to be.