A Hysterical Examination of One Famous Prick’s Terrible Life 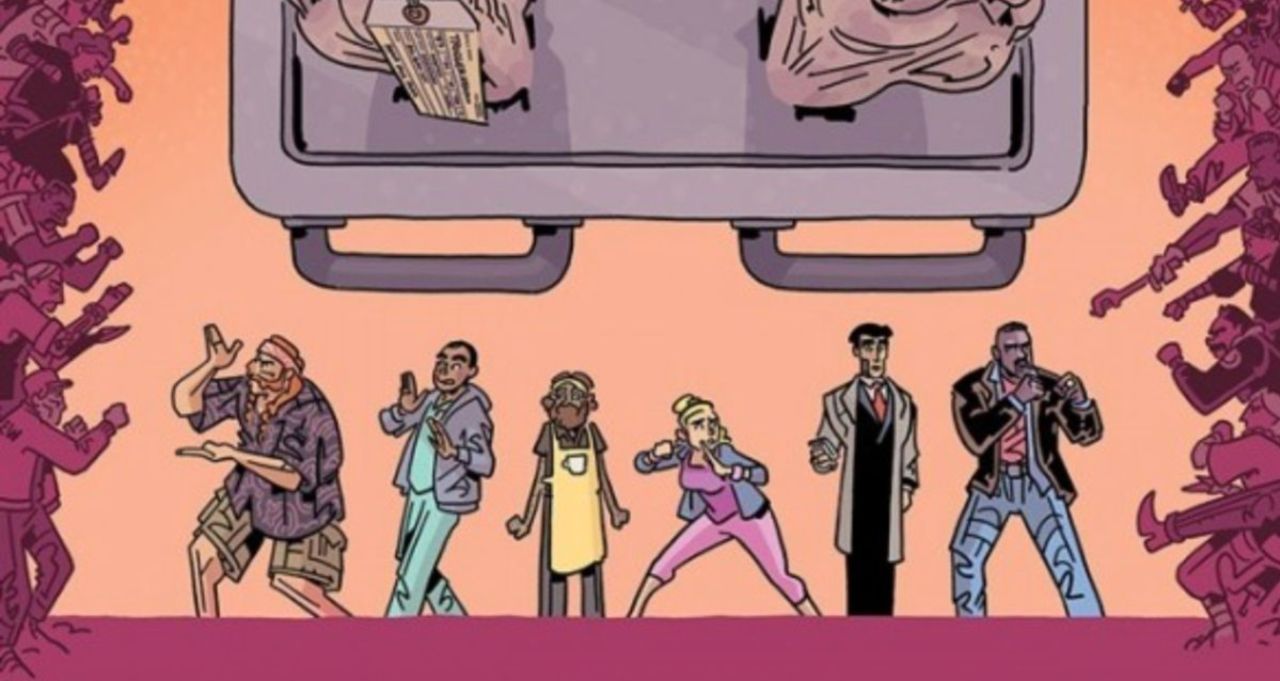 Readers familiar with Kyle Starks’ other original work—Sexcastle, Assassin Nation, Rock Candy Mountain—already know exactly what sort of story they’ll find in the pages of The Six Sidekicks of Trigger Keaton. That’s not to say the comic is predictable or iterative; this is the story of a cruel Hollywood action star who’s burned every bridge he’s ever crossed, found dead and the six no-longer-young child stars he burned in life left to investigate his death. It’s a weird comic, to say the least, but in the best possible way. That’s the part which returning fans are bound to recognize: A bizarre premise stuffed with colorful characters, gut busting humor, a deep appreciation of American pop culture, and a surprising degree of depth amidst all the tawdry details. The uninitiated can rest assured they’re in for one heckuva ride here.

Despite many moments of levity, The Six Sidekicks of Trigger Keaton #1 is a 24-page affair loaded with content. It’s a testament to the skill of the storytellers involved that this single issue can successfully introduce six distinctive characters, lay out the foundations of a strong mystery, and guide readers through the victim’s extensive history. This is exposition without explanation as each page delivers multiple informative threads neatly layered together using the form of comics. There’s no better example than each of six sidekicks’ introductions, which all include their name and order in bold letters along with two inset panels that show clippings from the start and end of their time with the titular anti-hero. These panels don’t slow the reading experience with lots of text, but provide just enough for readers to have a clear sense of each character’s trajectory and motives. Design and detail ensure that the present mystery and the most significant bits of history are all understood in the first 24 pages; there are plenty of Image comics that fail to accomplish this much when their first collection drops.

Chris Schweizer’s cartooning is essential to this introduction’s efficacy. Each of the sidekicks emerge fully formed on the page. Before a word is spoken, it’s possible for readers to see these individual’s personalities, pursuits (or lack thereof), and background in their design. This allows the first issue to focus on a handful of the crew, but still deliver on the title’s promise. Even characters who appear for a handful of panels will be instantly recognizable, with clear silhouettes and informative designs, when they reappear. Schweizer applies his impressionistic style to offer a lot of information with the fewest lines possible. One individual wearing crocs might go unnoticed, but once you see the briefly sketched shoes in the midst of spinning thrust kick, laughter becomes an inevitability.

The sidekicks who receive a spotlight in issue #1 are bound to leave an even greater impression. Terry Komodo, Keaton’s second sidekick, is a prime example: a washed-up stuntman who worships his former mentor as an idol despite decades of mistreatment. That description doesn’t naturally lend itself to laughs, which also makes Komodo a perfect example of what Starks does best in developing characters. The pathetic is transformed into the tragic, so Komodo can simultaneously be the butt of his own jokes (like offering mourners pocket beers) and a fount of reader sympathy (just wait for that lone tear). There’s something undeniably human in each of these seeming caricatures.

The Six Sidekicks of Trigger Keaton #1 is an undeniably hilarious comic—the rare sort that can make you laugh out loud every few pages, but the reason to keep reading past this very funny introduction won’t be the laughs, it will be these characters disguised as caricatures. Beneath the humor and ironic appreciation for Hollywood culture, this series is looking at 6 unique individuals traumatized by one powerful man’s ego, apathy, and cruelty. Each of them have handled it differently, but it’s apparent in these pages that the pain they’ve experienced isn’t a joke, even if their lives resemble one. It’s a difficult tightrope to walk, but it’s the same space that Starks has found so much success before and, partnered with Schweizer, should result in another comic filled with all of the contradictions that make humanity an endlessly engaging source for stories.

Denial of responsibility! My droll is an automatic aggregator of the all world’s media. In each content, the hyperlink to the primary source is specified. All trademarks belong to their rightful owners, all materials to their authors. If you are the owner of the content and do not want us to publish your materials, please contact us by email – [email protected]. The content will be deleted within 24 hours.
chris schweizerComic ReviewsImage Comicskyle starkssix sidekickstrigger keaton
0
Share

Savings rates: ‘Positive news’ as you can earn 1% for 12 months as savers pots near £1tn | Personal Finance | Finance

Battlefield 2024 alpha to kick off in July, beta coming ahead of launch