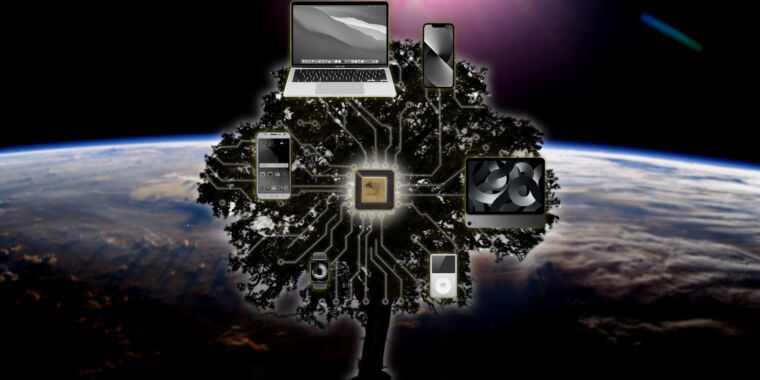 0
Share
The story so far: As the 20th century came to a close, ARM was on the precipice of massive change. Under its first CEO, Robin Saxby, the company had grown from 12 engineers in a barn to hundreds of employees and was the preferred choice in RISC chips for the rapidly expanding mobile market. But the mobile and computer worlds were starting to merge, and the titans of the latter industry were not planning to surrender to the upstarts of the former. (This is the final article in a three-part series. Read part 1 and part 2.)

It started, as did many things in the ARM story, with Apple.

Steve Jobs had returned, triumphantly, to the company he had co-founded. The release of the colorful gumdrop iMacs in 1998, an agreement with Microsoft, and the sale of Apple’s ARM stock had brought the company from near-bankruptcy to a solid financial footing. But Apple’s “iCEO” was still searching for the next big thing.

Jobs had equipped the iMacs with a new connector called FireWire, which enabled fast transfers of video and sound. A file format called MP3 was becoming popular for computer users to share music on their computers, and companies had already started making portable MP3 players. But these devices had tiny amounts of storage, slow USB 1.0 transfer speeds, and terrible software. Jobs became obsessed with the idea of making a player and devoted almost all of his time to the project.

Apple partnered with a company called PortalPlayer, which had been working on its own player. The hardware used a custom ARM chip, the PP5502. It was a system on a chip with dual ARM7 cores running at 90 MHz with 32MB of onboard memory. The only other large chip on the motherboard was a FireWire controller. The flexibility of ARM licensing made it easy to design a CPU that had custom circuitry for things like MP3 decoding.

How easy? An acquaintance, Dr. John Sims, told me the story of another MP3 player company from around the same time. It took a single engineer just six months to add a Digital Signal Processor (DSP) to the standard ARM design. A rival firm that was building chips from scratch rather than partnering with ARM had 60 engineers, and the project took three times as long.

The iPod shipped in 2001, and after a Windows-compatible version was released, the little music player became the industry standard. At the device’s peak, over 50 million iPods were sold each year. While people were enamored with its interface, ease of use, and iconic white headphones, most failed to realize that the iPod was actually a tiny computer. It had a CPU, memory, a miniature hard drive, and an operating system, and its touch wheel and buttons were like a little mouse and keyboard. It even had a bitmap display that could play simple games.

Speaking of games, ARM’s second big win in 2001 came in the form of Nintendo’s Game Boy Advance. The successor to the original Game Boy, it shipped with a 16.8 MHz ARM7 core with embedded memory. It also had a Sharp LR35902 for compatibility with the old system. Even portable game consoles were making the jump from CISC to RISC chips.