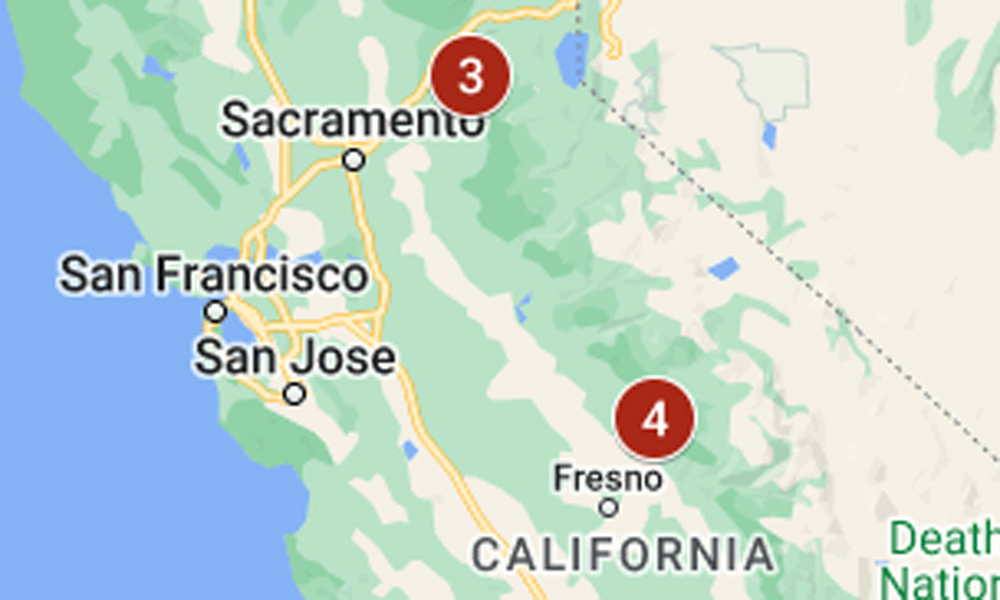 California’s wildfire season, which had been moderate for most of the summer, picked up in the past week with half a dozen large fires forcing evacuations.

High temperatures and low humidity have led to critically dry fuels across much of the state, and some of the current fires are in rugged terrain that is hampering suppression efforts.

The map above shows the locations of six notable fires. The descriptions below contain links to more detailed articles and maps.

1/ Mill & Mountain. The two fires that started Friday, Sept. 2, near Weed have remained within their footprints for several days, but evacuation orders remain in effect.

2/ Barnes. The fire near Goose Lake, in the state’s northeast corner, was started by lightning on Wednesday, Sept. 7, and has been burning “actively, with extreme behavior,” says the fire report from the Modoc National Forest. By Wednesday night it had burned 1,621 acres with no containment. The area is sparsely populated, and no evacuations or warnings had been issued as of Thursday.

3/ Mosquito. Evacuations have been ordered in Placer and El Dorado counties for the fire that started Tuesday, Sept. 6, at Oxbow Reservoir. After a day of extreme growth Wednesday, its area was estimated at 6,870 acres.

4/ Fork. The fire that started Wednesday afternoon remains under 1,000 acres but because of the difficult terrain and much dry fuel, the communities of North Fork and South Fork have been evacuated.

5/ Radford. Rain in the Big Bear area helped firefighters, and the acreage of the 3-day-old fire was at 1,100 on Thursday. Evacuations remained in effect.

6/ Fairview. The fire that started Monday, Sept. 5, leaped past Mountain to become California’s fourth-largest fire of the season, at 18,657 acres on Thursday.  A large area of western Riverside County is under evacuation order.