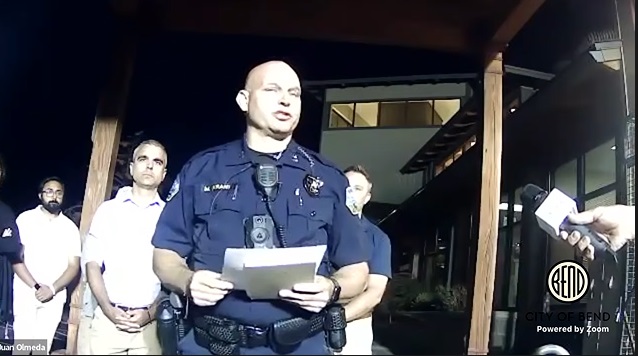 The Central Oregon Daily in Bend reported police responded to a shooting near the Safeway next to Costco along Highway 20.

The initial investigation showed “at least one shooter” was firing shots in the parking lot of the shopping center. That shooter went into Safeway through the west entrance and shot someone inside, who died. The shooter kept firing inside the store, “shooting and killing an additional person,” Bend police said.

A third person, “believed to be the shooter” was found dead by police inside the store.

At a 10:30 p.m. press conference, Bend Police Chief Mike Krantz confirmed that the suspected shooter “is a male,” but knocked down social media reports about a second or third shooter.

Krantz said they are aware of the social media reports and actively looked into them, but police have not found any evidence of a second or third shooter.

The suspected shooter used an AR-15 style rifle and also had a shotgun, Krantz said. His name has not yet been released.

The chief said he learned that one other person was wounded but the injuries “are not fatal.”

Heather Thompson told Central Oregon Daily she heard 5-8 shots and she thought it was backfire. “And then less than a minute later there were 10-20 shots and then another 10-20 shots. I told my dad to get away from the window and there were people running out of Safeway,” she said. The police arrived “in a matter of, like, 5 seconds.”

Thompson said she called 911 at 7:08 p.m. She did not see anyone who was injured, nor did she she anyone with a gun, but she said it sounded like the gunshots came from outside the store.

Seasons of Mists and Other Sandman Season Two Predictions