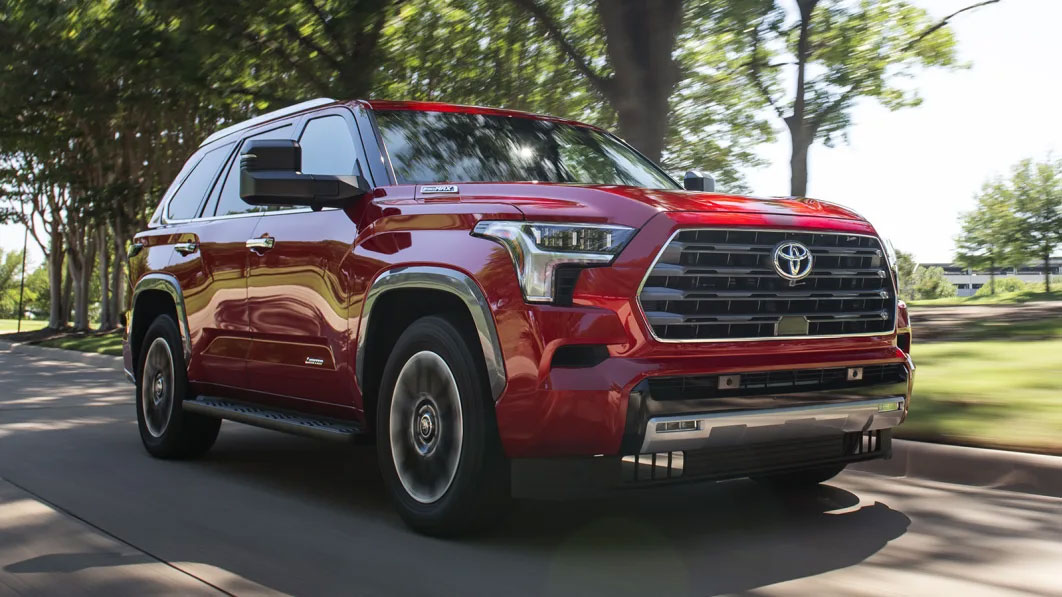 When we drove the 2023 Toyota Sequoia last month, Toyota wasn’t ready to give us estimated fuel economy ratings. Reps said the numbers should be similar to the hybrid Tundra pickup, the SUV sitting on that pickup platform and powered by the same twin-turbo 3.5-liter V6 hybrid making the same 437 horsepower and 583 pound-feet of torque, mated to the same 10-speed automatic transmission. We figured the Sequoia would get about 20 to 22 mpg combined depending on drivetrain and trim level, and we were right. Toyota put the numbers on its web site, the two-wheel-drive Sequoia returning 21 miles per gallon in the city, 24 on the highway and 22 combined. Buyers who choose four-wheel-drive are predicted to get 19 mpg in the city, 22 on the highway, 20 combined. Those numbers are the same regardless of trim.

Compared to the previous Sequoia and its 5.7-liter V8, the new family bus gets eight more miles to the gallon in the city, seven more on the highway, and seven more combined mpg. The gap narrows slightly on four-wheel-drive trims because the previous Sequoia only gave up one mile per gallon on the combined cycle to the rear-wheel-drive version. The 2023 Sequoia 4WD gets six more mpg in the city than the 2022 model, five more on the highway and six more combined mpg.

We dinged the new Toyota for not matching the polish and features of competitors, but the Toyota does now beat them all for fuel economy. A 2WD Chevrolet Tahoe with the 5.3-liter V8 and stop/start gets 15 city, 20 highway, 17 combined, and somehow makes the same rating when both axles are powered. A 2WD Ford Expedition with the 3.5-liter V6 and stop/start returns 17 city, 23 highway and 19 combined, dropping to 16 city, 22 highway, 18 combined. The relatively sippy nature of the Sequoia also moves its range on a full tank beyond that of the Tahoe and Expedition, at least on paper. We don’t think this is enough to put the put the 2023 Sequoia above rivals, but for the Toyota faithful looking to save money in this segment, that will happen on every trip to the pump.

The Best Dry Shampoo for Bangs, According to a French Beauty Expert