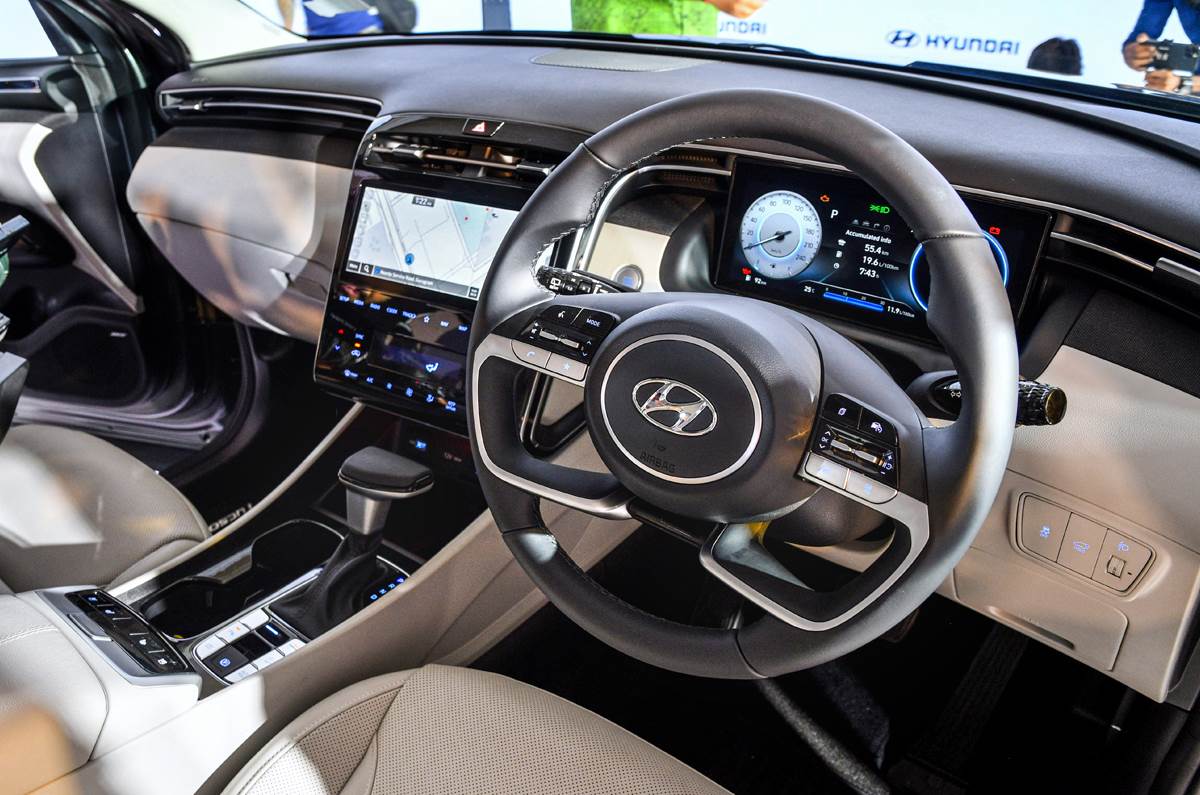 The new flagship SUV is the only Hyundai product in India to feature ADAS technology as of now.

Hyundai launched the Tucson, its flagship SUV, in India with prices starting from Rs 27.7 lakh (ex-showroom, India). Prices for the remaining variants are yet to be revealed. The fourth-generation Tucson comes in two trims – Platinum and Signature – and is brought to India in the long-wheelbase guise, while a shorter version is also available globally..

The new Tucson is offered with 2.0-litre petrol as well as diesel engines. The former is a four-cylinder, naturally aspirated unit that also powers the Alcazar, producing 156hp and 192Nm of torque, and is mated to a 6-speed automatic gearbox. On the other hand, the 2.0-litre diesel engine churns out 186hp and 416Nm of torque, which is mated to an 8-speed automatic gearbox. There is no manual gearbox on offer, but the all-wheel drive system with multi-terrain modes (Snow, Mud and Sand) is an option on the top diesel variant.

The new Tucson has a radical styling compared to its predecessor, aided by Hyundai’s ‘Sensual Sportiness’ design language and characterised by the sharply cut surfaces. Some of Tucson’s key highlights include a huge dark chrome front grille with jewel-like detailing that spans the width of the nose and integrates the LED daytime running lamps. The main headlamps are housed in the front bumper.

In profile, the new Tucson’s sharp character lines, flared wheel arches and body cladding gives it a bold look. A satin chrome strip that sits above the windows starts from the outside rear view mirrors (ORVMs) and extends all the way to the D-pillar. It rides on 18-inch, dual-tone alloy wheels. The wheelbase of the new Tucson is 85mm longer compared to the outgoing model, it will be more spacious for the passengers.

The new Tucson features dual T-shaped LED tail-lights that are connected via an LED light bar. The rear bumper features a diamond-pattern finish as well as a faux silver skid plate. It also gets a roof spoiler that hides the rear washer and wiper.

Inside too, the new Tucson is starkly different from the model it replaces. There’s a wraparound design on the dashboard and most physical buttons have been replaced with touch-sensitive controls. Along with the four-spoke steering wheel, the overall design of the dashboard is quite similar to one seen on the Creta and Alcazar.

A 10.25-inch touchscreen infotainment system is neatly integrated in the dashboard and has piano black accents around it. Additionally, it has a free-standing, 10.25-inch digital instrument cluster with personalised themes and turn by turn navigation. The HVAC controls are stacked below the screen and are now touch-sensitive. Furthermore, the centre console houses the automatic gear lever as well as a few physical buttons that control the heated and ventilated front seats as well as other functions.

The Tucson is the first Hyundai to get ADAS technology in India, and it’s likely to be followed by the Ioniq 5, Creta facelift and the new Verna. It will bring a suite of features like forward collision warning, blind spot assist, lane keep assists, rear cross traffic alert and more. This will make the new Tucson the only SUV in its segment to feature ADAS technology. Other safety features include six airbags, front and rear parking sensors, ESC, hill-descent control and all-wheel disc brakes.

The new Tucson will rival the likes of the Jeep Compass, Citroen C5 Aircross and the Volkswagen Tiguan. It will also rival the higher-spec variants of the Tata Harrier, MG Hector and Mahindra XUV700.

Would you pick the new Tucson over its rivals? Let us know in the comments below.