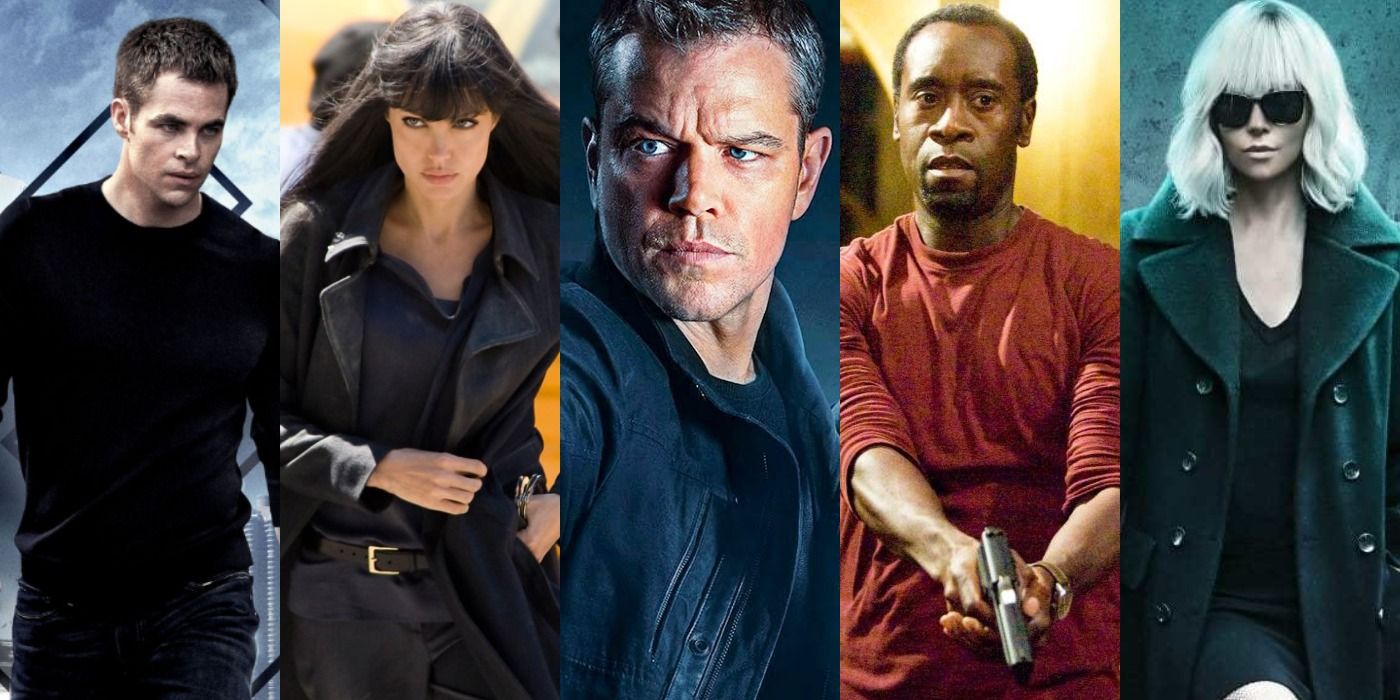 Fans of the beloved Bourne franchise are likely disappointed, with Treadstone abruptly canceled after only one season. Unfortunately, that extension of the universe was already rather messy, and strangely unwilling to focus on character development. Alleged plans for a reboot feel even worse—Matt Damon simply defines the role.

Still, fellow fans can find other spy thrills. Bourne’s world balanced the implausible with realism unusually well. Its technology felt grounded, and its cynicism was sharp and intriguing. Further, the emphasis on hand-to-hand combat was revolutionary for Hollywood action. So, until further news about the future of Jason Bourne, some alternatives can still offer some similarly satisfying attributes.

Updated on January 21st, 2021 by Mark Birrell: The Jason Bourne movies are so famous now, and detailed in such an impressive way, that its inevitable for an action movie fan to come across them sooner or later and, most likely, fall in love with their meticulous execution. When they’re done with them, however, they can then be left reeling from the jolt of above-average quality and find it hard to adjust back to normal offerings from the spy thriller genre. With these people in mind, we’ve added an extra 5 movies to our list to help ease them back into a world beyond Bourne.

Originally envisaged as a Tom Cruise vehicle, Angelina Jolie brought all of her star power to the lead role of Salt and made it her own. Similar to Matt Damon’s performance in the Bourne movies, she injected a relatively conventional role of a mysterious superspy figure with an unconventional level of emotionality mixed in with tenacious ingenuity.

The plot follows a CIA agent accused of being a hidden Russian sleeper agent. Up against all that law enforcement and the intelligence community can throw at her, Jolie’s Evelyn Salt has to think on their feet as Bourne does and proves herself a worthy comparison.

The sixth movie in Tom Cruise’s long-running espionage-thriller franchise surpassed its predecessors in many areas, the most famous of which was its use of stunts to make its impossibly action-packed world seem real.

Facing the remaining villains left over from the international rogue spy ring that Cruise’s hero Ethan Hunt and his team broke up in the previous movie, Fallout adds Henry Cavill to the ever-expanding ensemble and wowed both fans and critics with dazzling choreography and death-defying chases.

Charlize Theron stars as an uncompromising spy in this Cold War action-thriller adapted from the graphic novel ‘The Coldest City’ by director David Leitch (one of the creative forces behind the original John Wick movie starring Keanu Reeves).

Theron’s Lorraine Broughton gives Bourne a run for his money with her bare-knuckle brutality and precision, making for some of the most entertaining fight sequences of recent years.

Reality is almost never as appealing as fiction but there are incredible true stories from the spy world that make it into exhilarating movies. Breach dramatizes figures and events at the heart of the biggest and most famous data breaches in US intelligence history, where secrets were sold to Russia by FBI agent Robert Hanssen for decades before being caught.

Though it shares none of the Bourne movie’s focus on action, its cold and tangible view of the intelligence world will be very familiar for Bourne fans as will the performance of Bourne Identity actor Chris Cooper in the role of Hanssen.

Chris Pine took on the role of Tom Clancy’s titular protagonist in this modernizing of the ever-popular hero. Younger than previous iterations, Pine’s Jack Ryan certainly shares far more of Bourne’s brains than he does his brawns. But that doesn’t mean that Shadow Recruit shuns action set-pieces.

Sent to Russia to spy on Kenneth Branagh’s ruthless villain, Ryan fights more with his words than his fists but his verbal sparring matches with Branagh (who also directed) are fittingly electrifying.

Outside of a couple of shootouts, this movie is more of a political thriller and is mainly concerned with contemplating the United States’ relationship with the Middle East.

More specifically, the different approaches for stopping a terrorist, between Jordan and the CIA. The protagonist is a conventional agent, rather than a rogue man on the run. But the operations feel gritty and grounded, thanks to director Ridley Scott, who can always muster that aesthetic. Even if Paul Greengrass popularized shaky cam, Scott’s visual language remains distinct and appealing.

While this film is full of tropes, the notion that our protagonist can’t be trusted is neat. And it actually works at times, because this is a brilliant showcase for Don Cheadle. His performance drives the film, nuanced and compelling as always. This story is even less of an action film, but the tone and style were distinctly influenced by Jason Bourne.

This doesn’t just regard the familiar music and camerawork. The protagonist is being hunted at all times, and the actual spying tactics and obstacles are convincing. But even more noticeable, the film allows room to breathe, with interesting character construction that Cheadle makes endearing.

Famed director Tony Scott brought in Robert Redford, one of the all-time classic stars of spy adventures. The film is hinged on rescuing a captured, rogue agent before his execution.

RELATED: The 10 Best Spy Movies Of All Time

The story traverses basic politics, and Redford’s protagonist must operate against CIA interests to rescue his captured protégé. This is anything but an action film, but its layered and personal approach to spy activities fits the desired mold. And Scott’s breezy pacing ensures that the two-hour runtime feels earned.

Like so many government agency thrillers, this is about yet another terrorist plot. This time, the hero is a CIA interrogator, but that world feels lived in and sufficiently shadowy.

This cynical side of the CIA puts our hero on the run, and uncertain about who she can trust. Further, the gunplay and interest in close-quarters struggles feel directly lifted from Bourne’s world. Fortunately, Noomi Rapace sells the action well, quick-witted and hardly invulnerable. That circumstances don’t always work out perfectly for her definitely recalls Bourne’s troubles.

This powerful historical-fiction thriller involves the Israeli government’s response to the tragic murders of the 1972 Summer Olympics. Director Steven Spielberg has a remarkable ability to shed his blockbuster sensibilities and expand his range with success.

His approach to violence is truly harrowing, both realistic and charged with gripping cinematic suspense. It is not just a form of excitement, but a morally challenging, messy business. First and foremost, this is a poignant film, and Spielberg’s sensitive conversation is fascinating throughout.

This particular entry in James Bond’s never-ending saga was quite unusual. Aside from the obligatory opening sequence, which always feels like an old serial, the tone is reserved.

RELATED: 10 Movies To Watch If You Like My Spy

Bond is aging, and the movie is more interested in Bond’s personal past. Both Bond and Mission: Impossible had a knee-jerk reaction to Bourne in 2006, adopting gritty, darker tones and fight sequences. But this film is especially character-driven and tempered. Equally important, even its action sequences are less fantastic but no less entertaining.

A classic Hitchcockian thriller with a briefcase MacGuffin to rival Pulp Fiction’s, this movie is famous for its car chase. Director John Frankenheimer adjusted to modern cinema surprisingly well, with exhilarating and creative action sequences.

But audience investment is earned through a cleverly webbed plot, and the ensemble cast, who is an absolute joy to watch. While this may feel like more of a crime film, one of the characters is ultimately revealed to be a CIA agent.

This may be surprising, but the MCU actually crafted a fun throwback to classic spy thrillers. Steve Rogers ends up on the run from his own agency, which is infested with traitors. And the stunt choreography is truly dazzling, giving Rogers a powerful new image as a capable martial artist.

The action sequences in this film, even more so than its sequel, are unusually grounded for a superhero film. With brainwashing that hearkens back to The Manchurian Candidate, villainous moles, assassinations, and brilliant hand-to-hand, Rogers equates to a supercharged Bourne.

The Jack Ryan franchise is one of the few that both predates Bourne and appeals to his fans. The most renowned entry is mostly a submarine thriller, but Harrison Ford’s acquisition of the famed role is still plenty entertaining.

Ford always had the unusual ability to feel like an everyman and a superhero in his action films, which is endearing and fun. The pacing is breezy, and the characters are likable, with numerous classic actors. Ryan has always been one of the more convincing CIA agents on screen. He is an analyst, involved in a more familiar political landscape rather than fictional plots. But the slick approach causes an interesting balance, which is very rewarding.

The definitive spy thriller, a high bar with engaging performances, unrelenting violence, and fantastic intrigue. Robert Redford plays Joe Turner, a CIA researcher who discovers his co-workers have all been murdered. He ends up in a captivating cat-and-mouse game while pursuing the truth and finding romance with a civilian.

This is really quite similar to The Bourne Identity, which probably took more from this movie than Robert Ludlum’s nifty source material. In fact, even all of the villains in Bourne’s own franchise are similar to Redford’s opponent. The film has actually dated very well and is certainly essential viewing for Bourne fans. It imbued so many subsequent spy films with familiar ideas and that serious, gritty tone.

NEXT: The 15 Best Spy & Secret Agent Movies Of All Time (According to IMDb)

I am an author, screenwriter, gamer, and certified CAD Technician residing in Southern California.

Google is changing Android TVs from March: What you should know